Erinnerungen an / Memories of Otto and Anna 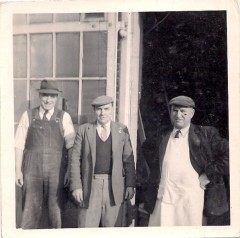 For the time he has been imprisoned in the KZ Sachsenhausen Otto receivedin 1956 a c
Otto Michaelis0001.pdf
PDF-Dokument [3.2 MB]

My Memories of Otto and Anna Michaelis.

I shall always have very fond memories of my grandfather and grandmother, Otto and Anna Michaelis (nee Rohde) or as I fondly called them ‘ Oma and Opa in Kent’.

My first memories of Oma Anna were probably when I was about six or seven years of age. We were in the Centenary Park which was quite near to where we lived in Queensbury, Stanmore (a suburb of London).

Oma Anna told me to look in the bushes. She had previously placed Easter eggs and Easter bunnies there for me to find. I found them, and believed that the fairies had placed them there. Yes, I did believe in fairies in those days, and still do sometimes today.

On another occasion I can remember visiting my grandparents in their very modest little flat in Lovebridge Road, Kilburn, London. There was no bathroom, a toilet on the stairs, just a kitchen and one large living room.  V very, very, modest. One very large rubber plant had reached the ceiling and was finding its way round the room.

On another occasion, I can remember walking up the road to our house with Oma Anna. She had just come from London fully laden with sweets, cakes and other goodies, she was very kind hearted.

I loved her a great deal, she was so tiny. She spoke broken English, and never really looked very happy. I was a child, I did not asked questions I just accepted what I observed.

On another occasion I can remember Opa Otto helping my father with some carpentry work. I always knew better, and proceeded to drive a chisel into my hand. I still have the scar to tell the story.

These are just a few of my first memories of Otto and Anna.

Around about 1970, Otto and Anna moved to the lovely town of Faversham in Kent, which is called the ‘Garden of England’. It was in this county that through the centuries, that fruit and vegetables were grown due to the very mild weather. .It lies about 75 miles from London. Faversham is a medieval town with much history and quite beautiful.

In 1970, I was ten years old, and it was not long before I was a regular visitor to 71, Alexander Drive. The house was a pretty three bedroom bungalow. Otto and Anna had searched for a long time to find a place they could retire to. Their lives had not been at all easy. Opa had worked really hard day and night, to make enough money for them to retire, and Oma had done cleaning work at a dentist’s surgery. As they had emigrated at such a late time in life, to a country in which the language and customs were alien, they had many problems.

There was a large Jewish community in London, and as they had all come with the same ‘baggage’ they all helped one another. Very close knit indeed.

I remember with very great fondness the times which I spent in Faversham. It was a place I could escape to. A place I felt at ease and at home. A place where there were two lovely people, with a wonderful nature and kindness. The summers were the best .In those days; they were long, sunny and hot. There was lots of fishing, long walks, fruit picking, strawberry picking.  The food was also excellent, as my grandfather had ‘green fingers’. The most beautiful fruit and vegetable garden you can imagine. Wonderfully organized and the best tasting products one can imagine. Indeed Otto supplied all of his neighbours with fruit and vegetables in the summer months.

Both Otto and Anna were loved by the community. They had after so many difficult, traumatic, sad years, found a place in which they could find peace of mind.

Now in hindsight I can remember a tattooed number on one of his arms. I never asked him about that. I know now what it was. On one occasion he explained why one arm was so much weaker than the other; it was due to blood poisoning when he was in a German camp, at the time I thought nothing of it, now I know the story.

Anna was always cleaning .Always on her hands and knees, brushing the carpet, dusting, hovering. This was a very annoying daily routine which one had to accept. Indeed Otto was often banished from the house, because he was in his gardening clothes, so he went for a snooze in his Greenhouse. How he survived the high temperatures I to this day do not know.

So, Otto  was in his garden, on long walks, or fishing, or at the neighbours, Anna was at home taking care of her little castle. You know ‘an Englishman’s home is his castle’ so the saying goes.

I have very fond memories of these two people, and said a prayer every evening that they would be with us forever.

When about fourteen or fifteen, I asked Otto if he was a protestant like Anna. No he replied,” I am Jewish”. I asked no further questions, I did not understand the significance at the time. I knew that Jews and Christians were different as I had had very close contact to the Jewish communities in London. Indeed my best friend, Gary Silver, was Jewish. I spent much time with the Silver family, went to Gary’s Barmitzwah. I was always given the feeling of belonging to the family.

I always had the feeling though, even in those young years that there was something missing from our family. What it was,| could never pinpoint. There was most definitely something amiss.

The years past, first Anna passed and two and a half years later, Otto passed.

Those wonderful days of ‘haven’ Faversham were gone. I can remember vividly though in the year that Otto passed, his garden went on and on and on. It went on the whole summer without him. Fruit, vegetables, and flowers en mass.

When we started clearing the house, we came across and old address which read Herbert Michaelis, Wellington Drive, Chicago, USA. My instinct told me to write a letter to find out who this was. You see there was always something missing in our lives.

Too many things open and not talked about. Secrets which should have not been secrets. I wrote and hoped of a reply. Months passed, and then one day, I received a letter from Siegfried Michaelis. He explained that he was the son of Herbert Michaelis, my grandfather’s brother, who had emigrated to America.  The details of which came to light over many years. Siegfried had explained that they had tried to contact Otto and Anna, over the years without success. We can imagine this to be true, today we live in a world where communication is so very easy. In those days it was not.

Siegfried also told me that Herbert had died a few years earlier from a brain tumour. How very sad I thought. I was on the great family exploration trail, and a brother of Otto was deceased. Siegfried and his family had been found. How wonderful, that was. We have been avid communicators ever since. With the whole family to I might add.

A Michaelis family in Chicago, USA, how very exciting that was, and is.

It was so fantastic to find them, a bit of the emptiness I had felt for so long had been filled.

Siegfried, Herbert’s son, had been found.

Then around 1984, we received a card from a Solicitor in Cricklewood, London, asking us to collect documents. I was very inquisitive as to what these documents were, and drove up to London to collect them. I can remember well the dusty offices of the elderly Jewish Solicitor. He proceeded to hand me a large pile of documents.

After I returned to my car, I decided to take a little look into the papers. For a few seconds my heart must have stuttered in its beat .The words Auschwitz, deportation, Buchenwald, Sachsenhausen, concentration camp, missing, Red Cross, and many others entered my eyes. I remember being filled with such emotions.

You see on that day in 1984, it became so very clear to me that my roots were Jewish. It became clear to me that the Michaelis Family, a very large family, had become a victim of the Holocaust, of the Shoah.

It also became clear to me that Otto had had the great fortune of being able to come to London , England in 1938.He had been in Sachsenhausen Concentration Camp near to Berlin. He had been lucky to leave the anti-Semitic Germany; he had once been at home in. Anna it seems had done everything in her power to get Otto out of Germany. He had left with one suitcase in 1938; the next time that they saw one another was 1948. This was the year Anna, and my father Walter emigrated to London. The family was reunited once again. Empty it was though.

So much had happened in the 10 years which had passed.

They had lost so very much. Otto had lost, his father Simon, mother Rosa, brothers  Alfred,  Erich, Max, uncles Alexander and family, Max and part of the family,(shoe shop Max Michaelis ),sister Meta Kahn and her entire family and many more people. Twenty or so lost souls who we should pray for.

My journey had started at birth. I always knew that something was amiss.

First I found out Otto was Jewish, then I found Siegfried and the USA Michaelis family, then the files about the Holocaust. In the meantime and not through chance, I am finding ever more out about our roots.

I thank GOD that he has shown me the way to my heritage, and I pray for those who lost their lives in the Holocaust, in the Shoah.